Evening folks – another extra blog post that I hope will counter the last rather negative and depressing post about The Wordsworth Trust.  This is the first in what I hope will be a random series of guest blog posts.  I’m going to hand over to Claire Trévien in a minute to explain how her first collection ‘The Shipwrecked House’, longlisted in the Guardian First Book awards came to be transformed into a touring show.  This seems an amazing achievement to me – surely the poetry equivalent of a novel being turned into a film?  And if there was a poet that would be likely to do such a thing, it would be Claire who seems always to be doing something exciting with poetry – recently writing a 100 poems in one day to raise money for Refuge for example.

Claire Trévien is one of those people who frequently puts her head above the parapet by being out there and doing stuff – running the Sabotage Reviews  seems to be one of her main ongoing project, but she was also the driving force behind the Penning Perfumes project as well.  I’ve just had a quick skip over to Claire’s website here and there is lots of information about the other stuff she is up to – as well as writing her own poetry, she seems to spend a huge amount of time reviewing and editing and anthologising other people’s work.

You can find information like dates and venues for the tour over at Penned in the Margins but I’ve asked Claire to talk a little about how the whole thing came about – how do you go about transforming a poetry collection into a show that tours?  And as an extra treat, EVEN THOUGH it’s not Sunday, there is a lovely Trévien poem at the bottom of this post.  How about that.  I’m really hoping that the show is so successful that she has to venture a little further north so I can go and see it. 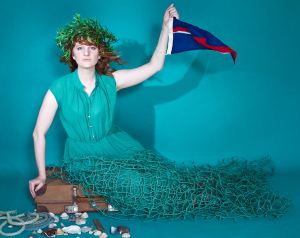 The Origin of the Shipwrecked House Show

Since starting the process of transforming The Shipwrecked House collection into a show, I’ve been frequently asked the same sort of questions: how, why, and when was the idea born?

I have a precise date for the idea of transforming The Shipwrecked House into a show: 23rd November 2013. I know this because it was after hearing me read at Interrobang Festival that my publisher Tom Chivers pitched the idea. Since my collection was published in March 2013, I think that makes it clear that the show came after the book, which is a fairly unusual way of doing things perhaps. At the time we had lots of ideas about what it could become, I was keen to use poems I couldn’t normally read at poetry events and involve scents somehow (a minor obsession of mine), Tom was interested in it being a poetry show staged theatrically.

The first test was a preview in March at 4749 Tanner Street where Tom and I had a day to rehearse for a fifteen minute extract in the evening. We talked about themes that we’d like to draw out. I’d just come back from a trip to the Isle of Wight where the storms had dropped whole parking spots into the sea, I’d found brick walls fallen whole, carbonated tree trunks laced with fools’ gold on the beach. I was interested in discussing the darker side of the sea, the sea as a mass graveyard, the sea as a destroyer of coastlines, the sea as the great concealer. Although the collection is eclectic, common themes of environmental issues, Breton folklore, and domestic violence could be teased out, and we brainstormed about this at length.

It’s only once the Arts Council funding came in that the show concretised itself. I’d been involved in various shows as a student, but nothing to this professional level and it was a little overwhelming at first to be surrounded by all these clever and talented professionals, the core team of which was Russell Bender as consultant director, Oliver Barrett as sound designer, Gary Campbell as set designer, and of course Tom Chivers as producer/director. Perhaps the most terrifying aspect is that in the end the onus was on me to create the supporting material, to take charge of the direction it should take and, to perform it solo. In that sense the first two weeks were by far the hardest for me, as they involved transforming nebulous material, ideas we’d voiced but not put into practice yet, and gathering the input of several talented individuals into creating a cohesive whole.

The script had to be created from scratch in a short space of time using poems in an order that would make sense, with new material to bind it together. I found the endless discussions at the start of the process frustrating (‘but what does the home mean?’ ‘wait, where is this set?’) because I’m more of a do things first ask questions later kind of gal, but they were necessary. The key for me was realizing that even if the audience doesn’t see the links, we have to have our own internal logic for everything that happens on the stage. I wrote some dry material to accompany the poems at first, we either found ways to play or build on them, or replaced them entirely. As the process went on I became more confident about substituting phrases and editing sections to suit the performance. I’m not a playwright and don’t think I could write for the stage in a vacuum, but this way of doing things worked for me.

One of the things I’m happiest about with the show is that we did manage to incorporate scents, from my favourite perfumer, Sarah McCartney at 4160 Tuesdays with a specially commissioned

two-part scent. The audience enters to the smell of ‘House’ with ‘Shipwrecked’ occurring later. I’m not going to say anything more as it’ll ruin the surprise though…

Whales lived under our house
making the hinges rock, splitting cups and cheeks.

Stray socks melted in their comb-mouths
their fins sliced through conversations,
we found bones in our cups of tea.

Most of the time they just wanted to play
bounced against bookshelves, snorted leaks,
threw bodies across the room.

No one believed me of course,
the carpet looked too smooth to hide a mammal.

At night, I’d listen to their song
beat through the floorboard
like slashes of headlight.

For days they’d circle the house
take a dive into the cellar, press the doorbell
and run, I’d sometimes forget then trip
over the carcass of one beached
in the gutter.