This morning, my lovely husband said ‘Let’s have an easy Sunday today and not go for a long walk’ (which was what we’d planned).  Ok, I said, thinking longingly of the multiple episodes of Love Island I have to catch up on, having been away most of the week (more news of that later).

I decided an easy Sunday meant I would go for a run with the Walney Wind Cheetahs to make up for not going for a walk.  It was a bit of a rush as I went out last night for a meal with friends and then to see a band.  I got back home at about midnight, so I decided not to set my alarm.  I woke up at 9.30am and somehow got to the meeting point by 10am, even managing to be in appropriate running gear rather than pyjamas.

When I got back from the run, which was very hilly and my first seven mile run since I’ve been injured, the ever-inspired husband asked me to come and walk the dogs with him.  Two hours later, having trekked over fields with cows that eyeballed me ferociously (husband said they were just curious) and a sheep that sneezed and scared itself and me, causing us both to run in opposite directions and numerous stiles covered in nettles we finally arrived back home.

The easy Sunday wasn’t over yet – husband then decided he was going to paint the garden shed, so I felt obliged to do some weeding.  I’ve just escaped, using my blog as an excuse (knew there was a good reason to do it every Sunday).  Luckily for me he never reads it so I can say what I like!

My twin sister once quite rightly pointed out a while ago that I hate doing anything I’m not already good at, which is completely true.  In the last few years she has learnt to scuba dive and ski on various holidays, whereas for me, that would be my worst nightmare – the potential of embarrassing myself in front of people by being rubbish far outweighs the benefits of being able to ski or scuba dive.

This PhD has been really challenging for me this year for lots of reasons.  Being ill and taken into hospital and an emergency operation didn’t help.  But probably running deeper than that is this mortal fear of embarrassing myself by being rubbish. I never had this feeling when I showed people my poetry for the first time, but I’ve definitely had it worrying away at me as I’ve been writing the 5000 words for my supervisor.  Despite this, I’ve really enjoyed writing it, and although I’m a bit nervous about the meeting next Tuesday to discuss it, I’m also looking forward to it as well.

One thing you aren’t told before you start a PhD is that you will know yourself a lot better than you did before you started.  I didn’t agree with what my twin sister said to me at the time, but I do now! I also didn’t know how much I need goals to work towards, not to make sure I’m doing some work, but also so that I feel like I’m doing some work, so that I’ve got something to show for it.  I’ve also learnt that to be a successful PhD student you need to ask for things, like meetings with supervisors and people’s time and advice.  I find asking for things excrutiating, so again another thing I’ve had to get over and just get on with.

Although I’ll just keep going with the PhD over the summer, it does feel like the end of the year.  I had my end of year review last week which went really well.  My report from my Director of Studies (Michael Symmons Roberts) was really positive and encouraging, so I feel more confident about the PhD.

On Wednesday I got the 5.23am train from Barrow to Newcastle (who knew there was such a thing as a 5.23am train?).  I spent Wednesday to Friday at the English: Shared Futures conference, my first academic conference.  The lovely poet Emily Blewitt invited me to take part in a discussion about Creative/Critical practice, and on the Wednesday night I gave my first mini, 15 minute academic paper! It was perfect timing really as I took some of what I’d done as part of the 5000 words and included three poems I’ve written during the PhD.  Kate Fox also talked about her own work – she is at the end of her PhD so it was really interesting to hear her thoughts.

I had some really great feedback as well, so much in fact that I’m in danger of believing  I did ok.  I loved being at the conference as well.  I went to an event with Hannah Lowe, Mary Jean Chan and Jennifer Wong about borders and place in poetry, and then a Salon with Helen Mort. I wanted to go and see how poets moved around in this academic setting, and I’m glad I did, because I really enjoyed the papers, and it made me a little more confident that I could do the same thing.

It felt wonderfully decadent to spend three whole days learning things, listening to people talk about something they felt really passionate about. My other favourite moments of the weekend were hearing the plenary speech from Deborah Cameron.  The title was ‘Language, and the Problem of Female Authority’. She said that a better title might have been ‘Language, and the Problem WITH Female Authority.’

The last event I went to was about Sexual Misconduct in Universities which is basically at epidemic levels.  This event completely blew my mind.  It was really upsetting, but also very inspiring as well.  It made me think differently about things that have happened to me in my life and how to name them.  This blog post is already way too long, so I think I will probably return to this subject another time when I have got my thoughts a little bit clearer about it.

So it has been an exhilarating week! I got back from Newcastle at 6pm and then went straight out to the launch of Pauline Yarwood and Katie Hale’s pamphlets at Crosthwaite Village Hall.  I was pretty shattered by the time I got there, but it was a great event and I didn’t feel tired once the poetry got going.  Three of my Dove Cottage Young Poets read as well, which was great.  There was a fantastic turnout in the hall and it looked like Pauline and Katie sold lots of pamphlets! 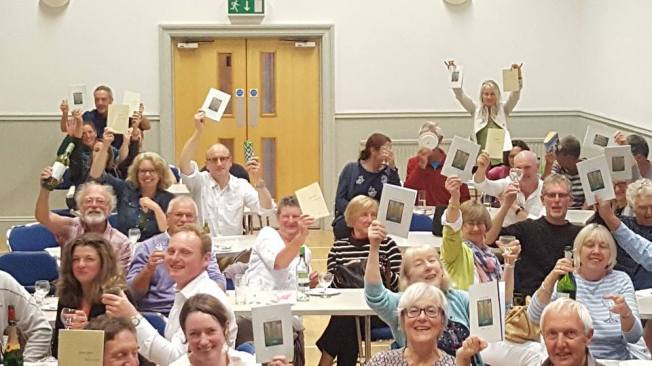 Next week I’ll be posting a poem from Pauline’s pamphlet, but this week, I’ve got a poem from Katie’s to share.  Katie has had one amazing year with her writing.  Her pamphlet Breaking the Surface was published with Flipped Eye about a month ago.  She recently won the Jane Martin Poetry Prize and the Ware Poetry Prize and was shortlisted for the Ballymaloe International Poetry Prize.  She also came second in the Tannahill International Poetry Competition.  Her poetry has been published in Poetry Review, The North and Interpreter’s House, among others.  Katie also writes fiction and is currently being mentored for her first novel, ‘My Name Is Monster’ by Penguin Random House on their inaugral Write Now scheme.  Her musical The Inevitable Quiet of the Crash, co-written with composer Stephen Hyde will premier at Edinburgh Fringe.  I did say she’d had a pretty fantastic year – a lot of these successes have happened quite recently.  I did wonder, but forgot to ask Katie whether it coincided with her decision to give up full time employment and become a freelance writer.  There is something powerful I think about giving your time and energy to something – good things happen!

The poem I’ve chosen ‘The Raven Speaks’ is one of my favourites in the pamphlet. The raven in this poem is the one let out by Noah from the ark to find land.  I really like the creation and development of the raven’s personality throughout this poem – it’s sense of independence: ‘is it any wonder I didn’t come back?’ and it’s disdain for the stink of the ship, but mostly for the ‘lily-winged dove’ and its understanding, or interpretation of the dove’s true nature as being ‘pampered’ but also deadly.  In fact when you get to the surprise of the end of the poem, and return again to the beginning and the quote from Genesis, you realise that it is not the dove which is deadly, but Noah, and by representation Man, who will conquer the earth again, once the flood waters recede.

One of the things Katie does brilliantly throughout the pamphlet is description – she has pin-point accuracy.  You can see this in the ‘mad tessellation of wood’ and ‘the lift and slump of horizon’ and the ‘chorus of sunlight’.  I also loved the ‘drowned fish’ which made me stop and think – the use of that phrase makes the reader realise the speed with which the water receded, meaning fish were stranded on the ‘rocky/dump of mud’.

For a month or more, he kept us
in the dark, locked
in his mad tessellation of wood.

Through a slip of it, we could see
the lift and slump of horizon,
and on rougher days
shards of air forced themselves
through the gap

When he took me
from the hull, led me up
and out towards the day…

to feel the chorus of sunlight on my feathers,
the freshness of salt
scouring from me the greyness of captivity…
when they unhooked my claw
from the metal ring, and made me soar –
is it any wonder I didn’t come back?

I found land: a rocky
dump of mud and drowned fish,
the single resilient
olive branch. It stank
fierce as the ship I’d left behind.

I saw her coming,
that lily-winged dove. Hid.
Watched her pinch that little spurt of green
in her petite, pampered beak,
and promptly nip it, dead.