I’m really excited to announce that I’ll be co-tutoring with the amazing Amanda Dalton at next year’s Poetry Residential at Treloyhan Manor in St Ives.  This course always sells out fast, so if you’d like to come, ring the hotel below to secure your place.  Amanda was one of my favourite teachers when I was studying for an MA in Creative Writing at Manchester Metropolitan University, so I’m really excited to be working with her in St Ives.

The course is running from the 8th-13th April 2019 and costs £550.  This includes breakfast, three course evening meal, scones with jam and cream in the afternoons, accommodation, workshops and a tutorial with either myself or Amanda during the week.

More information about Amanda (and me) below.

Tutors
Amanda Dalton
Amanda Dalton is a poet and playwright. Her poetry publications include How To Disappear and Stray (both Bloodaxe Books) and her writing for radio and theatre includes radical re-workings of the Medea myth (Wilson+Wilson Co /Sheffield Theatres) and of the silent movies Nosferatu and The Cabinet of Dr Caligari (BBC Radio 3) incorporating poetry and sung lyrics. Recent BBC audio drama also includes an adaptation of Tove Jansson’s The Summer Book. She is an Associate Artist at Manchester’s Royal Exchange Theatre, a Royal Literary Fund Fellow based at the University of Manchester and a visiting lecturer in the Writing School at Manchester Metropolitan University.

Kim Moore
Kim Moore’s first collection The Art of Falling was published by Seren in 2015 and won the Geoffrey Faber Memorial Prize.  Her poem ‘In That Year’ was shortlisted for the Forward Prize.  She won a Northern Writers Award in 2014, the Geoffrey Dearmer Prize in 2011 and an Eric Gregory Award in 2010.  Her pamphlet If We Could Speak Like Wolves was one of the winners of the 2010 Poetry Business Pamphlet Competition.  She is currently a PhD candidate at Manchester Metropolitan University.

In the summer of 2017 I was a guest poet at an Arvon course at Lumb Bank.  I met a poet called David Cox there, who emailed me in January to tell me that he would be using some of my poetry with his Year 7 pupils at The British School in Warsaw to get them writing their own poems.  I asked David to send me some of the responses from his pupils, and he sent them through in January of this year.

I loved them straight away, but PhD madness and everything else going on at the moment has meant I’m a bit late in posting these poems up, but I wanted to share them with you all and say thanks to David and his talented pupils, who if the school term in Warsaw runs the same as ours here, will be about to go into Year 8 after the summer holidays.

These poems are in conversation with my poem ‘My People’ which I’ll post at the end of this blog post.

David sent through this introduction to the poems:

My Year 7 students at The British School Warsaw have been working on producing a series of poems inspired by  Kim Moore.  The original poem with its humour and edginess has spurned their imaginations into looking for an answer to the following question: who are ‘my people’? One students said it allowed me to “express my family and country the way I saw it…it was really fun thinking about all the things that come to mind when I think of ‘My People'” We have seen the dangers of ‘casual racism’ around us and its worrying effects. To this end, we discussed how we can unwittingly become part of groups with less than altruistic pursuits. Their pastiche responses to ‘My People’, at times reflect the pride of a nation or an ethnic group. Watching clips from the miner’s strike, students heard the brazen words ‘scab’ bellowed out towards buses of employees passing the picket line to understand how one community was torn apart by a declining industry. Such experiences continue to elicit a range of emotionally charged responses. They considered democracy versus mob rule. They considered how instrumental such union organisations as Solidarność were in Poland at loosening the shackles of the communist regime. I hope you enjoy these poems.

Here’s the first poem David sent – my favourite part of this poems is that surprising simile at the end where the poet turns our expectations on their heads.  Usually, to be compared to a snake would be negative, but this poet chooses to focus on the positive aspects of snakes: they are ‘clever and fast’. 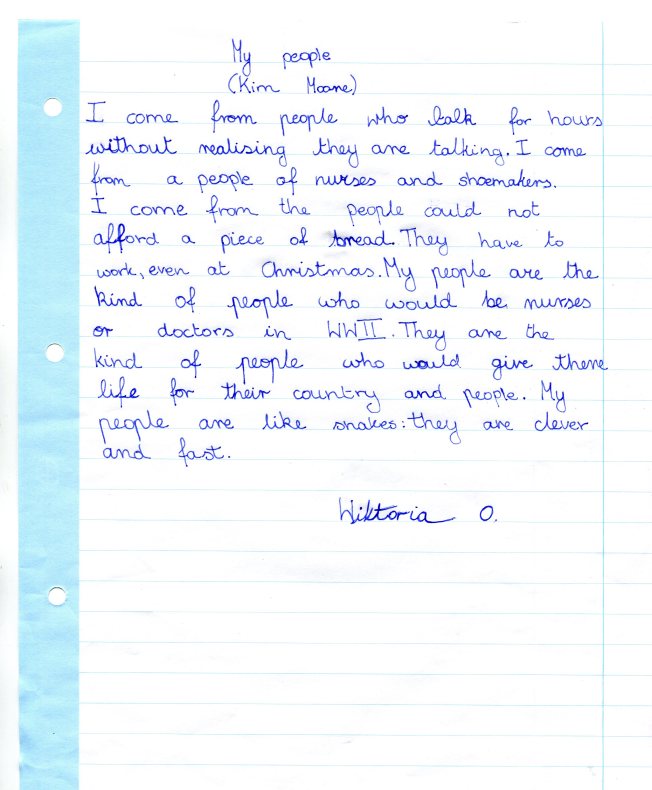 This next poem has some lovely phrases and images – I love the sentence ‘people who would kiss the bread if it fell’ and wondered if this was a story or saying that is well known in Poland? 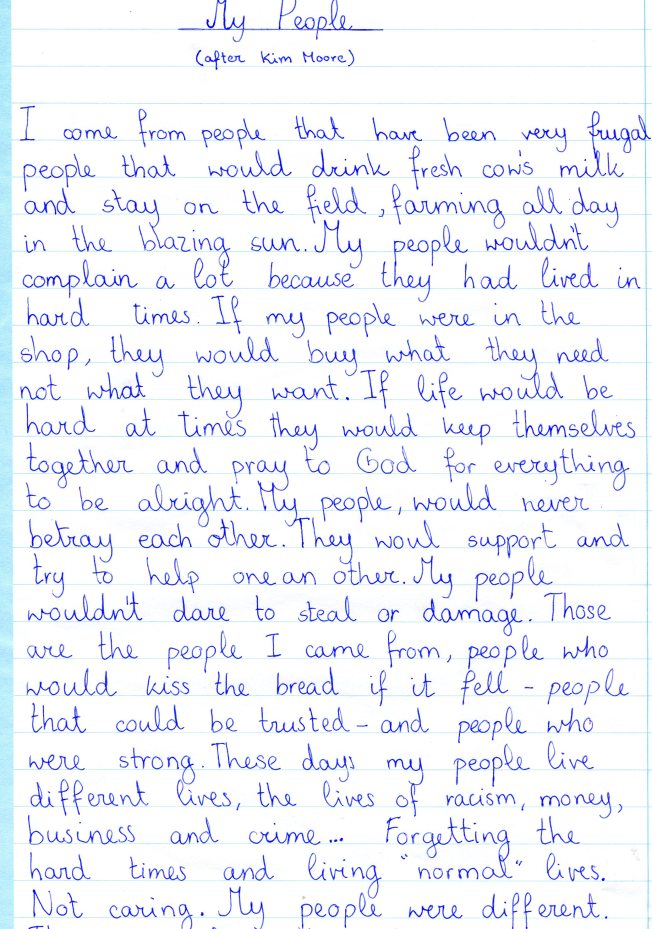 This poem is a tough look at how people can become obsessed with money, and become selfish – and again, a great last line – ‘Now they have become selfish like little toddlers’. 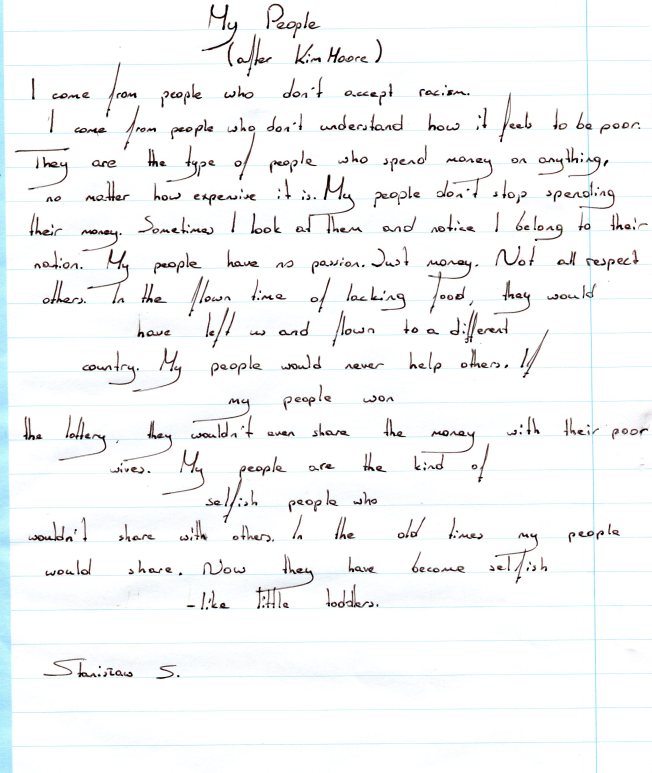 A completely opposite opinion with this next poem! I like the line ‘people who care for others, even strangers’ in this poem.  Would definitely like to meet these people! 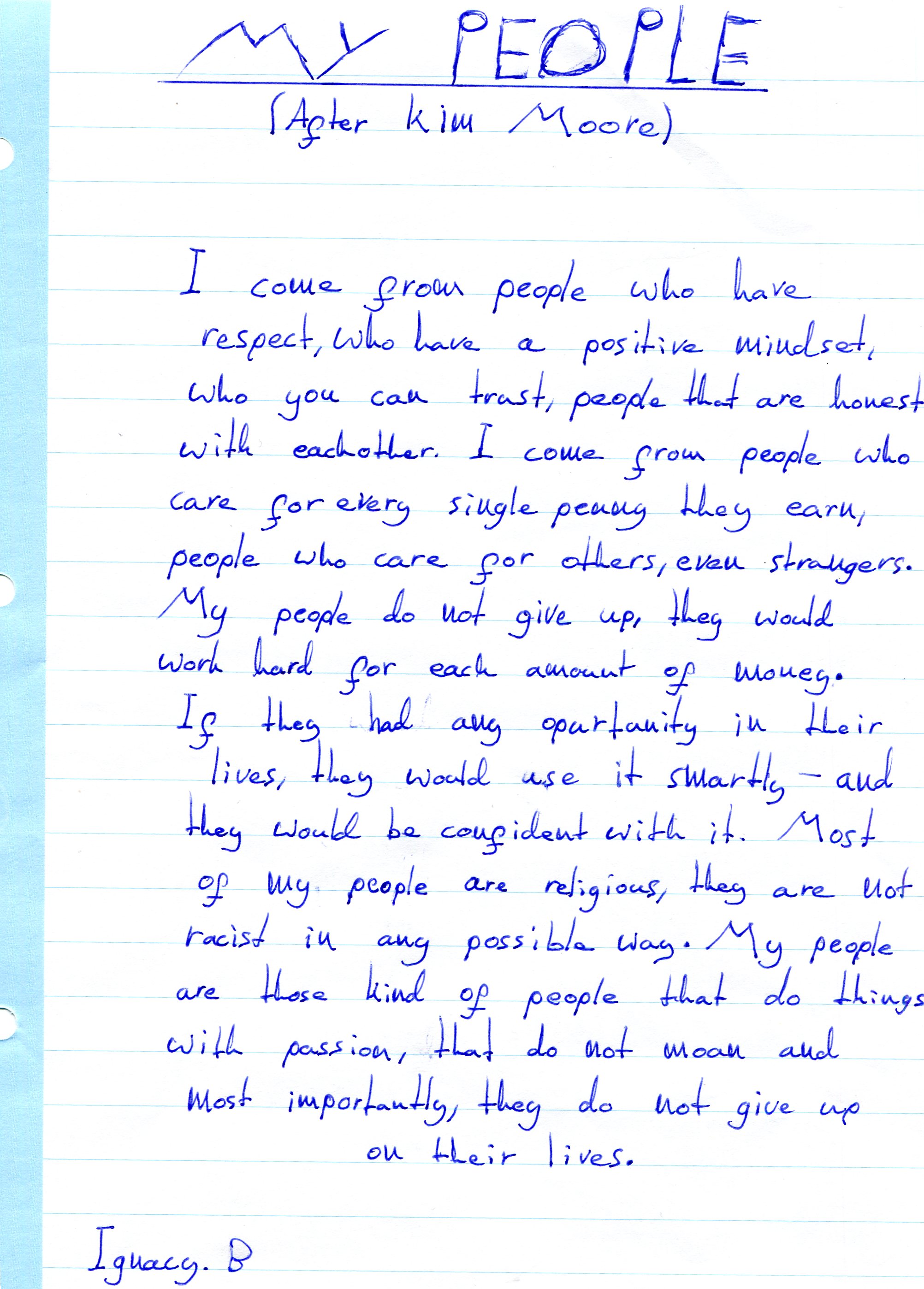 I really like this one – again with a killer last line ‘My people are like small bees serving the queen bee’.  I also like the line in the middle ‘In the time of the Romans my people would probably be writing on scrolls or feeding grapes to the king’.

I like that this poem explores positive and negative aspects.  These are people that don’t tolerate racism, but people that also what it is to be poor. I also like the two short snappy sentences that finish it off: ‘My people are like wolves.  They stick together’.

I think this poem works really well at painting a portrait of a group of people.  I’m not sure if the last line in the first sentence is ‘up’ or ‘you’ – both would work really well, but I think I’d like it to be ‘I come from the people who don’t want to meet you’.  There are some wonderfully strange details in here as well, like the line about the people being ‘underweight and too strict’ immediately following the detail about the fights at the football match.  And another great ending – witches and fire breathing dragons! 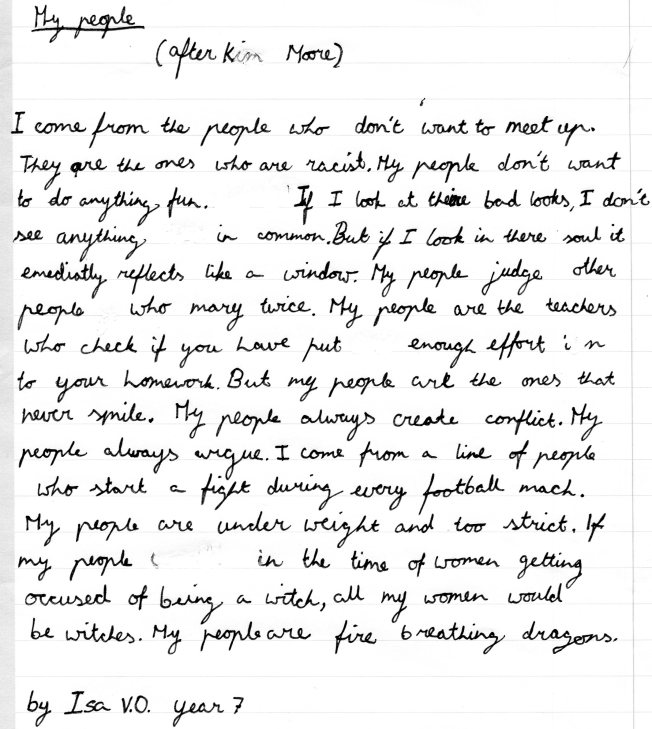 What a great first line this poem has, and the second line is just as good – people who ‘come from every corner of the world’.  I also love the last two sentences of this poem – the rhyme of ‘everywhere’ and ‘air’ makes it feel like the poem is a box, and the poet has just closed the lid, nice and tight.

So that was the last poem!  Thanks to David Cox and his pupils once again – I’m very flattered that they’ve been using my poem for inspiration, or to start a poetic conversation about what it means to have a people.  I got the feeling that some of the poems might have been talking about people in terms of a close knit family, and some were talking about people in terms of a community or even a country, on a larger scale.

Here are my people below.

I come from people who swear without realising they’re swearing.
I come from scaffolders and plasterers and shoemakers and carers,
the type of carers paid pence per minute to visit an old lady’s house.
Some of my people have been inside a prison.  Sometimes I tilt
towards them and see myself reflected back.  If they were from
Yorkshire, which they’re not, but if they were, they would have been
the ones on the pickets shouting scab and throwing bricks at policemen.
I come from a line of women who get married twice.  I come from
a line of women who bring up children and men who go to work.
If I knew who my people were, in the time before women
were allowed to work, they were probably the women who were
working anyway.  If I knew who my people were before women
got the vote, they would not have cared about the vote.  There are
many arguments among my people.  Nobody likes everybody.
In the time of slavery my people would have had them if they
were the type of people who could afford them, which they
probably weren’t.  In the time of casual racism, some of my people
would and will join in.  Some of my people know everybody
who lives on their street.  They are the type of people who will argue
with the teacher if their child has detention.  The women
of my people are wolves and we talk to the moon in our sleep.

If you’d like a poetry fix and are missing the Sunday Poem, you can head over to Kendal Poetry Festival and check out our ‘News’ tab.  We’ve got three Five Minute Interviews up so far with poets that are appearing at the festival.

Kendal Poetry Festival takes place from the 6th – 9th September at the Castle Green Hotel in Kendal.  We have an amazing programme of events lined up and I hope to see some of you there!

Because of an extremely busy schedule and other work commitments, Fiona Sampson is unable to tutor at the Poetry Carousel this year.   I hope she will be able to come and tutor on another course in the near future, and those readers based in Cumbria might want to try and catch her when she appears at Borderlines Book Festival this year.

I’m disappointed not to be working with Fiona this year, but happy to announce that Greta Stoddart has agreed to step in to tutor on this year’s Carousel alongside myself, Andrew McMillan and Sean O’Brien.  Those of you who were at the 2016 Kendal Poetry Festival may remember Greta from the fabulous reading she gave there alongside Fiona.

Her latest work, a radio poem called ‘Who’s there?’ broadcast on BBC Radio 4 was shortlisted for the 2017 Ted Hughes Award.

She has been Fellow at Warwick University, Writer in Residence at Exeter University and tutor at Bath Spa University and Goldsmiths College. She now lives in Devon and teaches for the Poetry School and the Arvon Foundation.

Information about the workshop that Greta will be running will be posted on the Poetry Carousel page shortly, so watch this space. 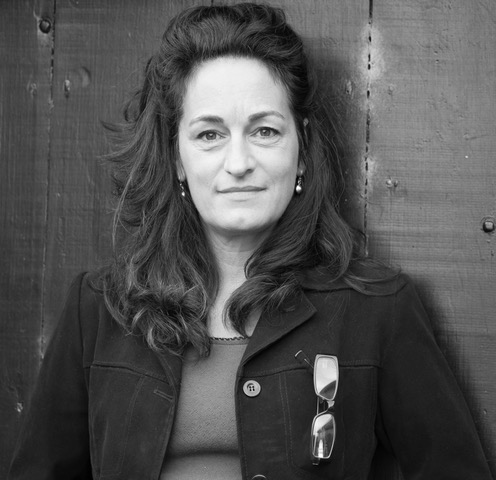