If you would like to buy a copy of The Art of Falling, the easiest way is to buy direct from Seren.  If you join their book club, you will also receive 20% off the cover price. 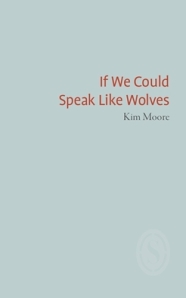 You can buy a signed copy of ‘If We Could Speak Like Wolves’ for £5.00 plus £1 postage and packing or you can buy a copy direct from Smith/Doorstop.

“Kim Moore is the most compelling poet under review because she is least afraid of the dark sounds speaking through her.  She welcomes and invokes duende: the unworldly and worldly occupy the same verbal space.  Her poetry is always out of the ordinary yet unshowy despite (or because of) her expert and subtle handling of line and form.  The result: a balanced arrangement of wild gift and mindful shaping (even a poem about Watership Down possesses duende).  Moore is also the poet most likely to communicate to people who do not read poetry – yet her work is in no way simple or charming.  Much promise yielded, much beckoning for the future.

Ambit 210 – Review by Donald Gardner
What attracts you to a poets work is often a phrase or choice of word that takes you aback with its unforced authenticity. ‘…we heard the herons, calling and swearing/high in the trees’, Kim Moore writes.  And in another poem: ‘the woman was a long-necked bird, bending/its proud neck to feed, and the man lay/like an expensive table.’  Moore’s lyrical verse usually has a narrative or incident coiled at its heart like a spring.  It is poetry with a synaesthesia of eye and ear, carefully observed and you can hear the lines too as you read them on the page.  I was struck by the understated power of ‘The Messiah, St Bees Priory’, about the killing spree of a taxi driver in Cumbria in 2010 that ends,

‘…that afternoon when the sun
was a hand on the back of their necks,
when villages, hardly talked about before,
were the names on everybody’s lips.’

The poem also speaks of people drawing closer together under the influence of a tragedy as if grief formed a community.

There is sadness and romance but also plenty of humour in Kim Moore’s chapbook.  In one poem she celebrates a weird train journey:

Another, ‘In Praise of Arguing’, describes a rowdy relationship expressed, tongue-in-cheek, by the furniture that seems to have displaced itself:

‘and the blinds wound
themselves around
each other (…)

And the doors flung
themselves into the street…’

Maybe I’m cherry-picking lines, but in fact Moore earns the high moments in her poems, which celebrate the unexpected in regular stanza lengths – six, five, four or three lines. (My one reservation is that she might risk breaking this uniformity and exploring the potential of less taut structures – her work can sometimes feel a bit too tidy.)  These poems are personal narratives, not complicated, except in so far as relationships and human behaviour are unpredictable.  Here’s a quote for the road anyway, from ‘Retirement’, about a poet who has signed off:

‘Sometimes he imagines
the footprints of the tube mice,

sooty on his words,
the swirl of pages,

showing off
in the backdraught of a train’

Review from Acumen 75 by Wendy French

If We Could Speak Like Wolves was a winner in the Poetry Business competition, judged by Carol Ann Duffy, and justly so.  It is a collection in which the poems are charged with emotion and wit.  There is, however, a darker side to some of the work – a sinister, energetic undertone which raises the words to another level of intensity.  I could not put this pamphlet down.  Each poem led into (and I mean into rather than just to) another with a courageous confidence.  The title poem (and what a brilliant title) is exciting and presents us with an alternative to being human: “if it could be forgotten/the moment the wind changed, if my eyes/could sharpen to yellow, if we journeyed/ each night for miles”.  And from that the reader is hurled into ‘The Thing.’  “It was a morning like this when you carried it in./There was no one to see but me, how it curled/in your arms…”.  It is never specified what the ‘thing’ is; the reader does the work here and that makes the poem mysterious and compelling, “Will we leave it unspoken,/that the thing, like all things, needs a name?”

These are engaging poems with energy, variety and pace.  The ending to each poem is unexpected and unguarded.  Moore is confident enough to end the poems without a neat closure.  In the disturbing poem, ‘Shelley’ we are taken from a relatively comfortable domestic scene to a scene of horror:  ” (his mother reassures herself) but no, he’s counting/down the seconds until the device he’s left inside/the chimney” and the poem ends “his mother, turning/like a horse, hiking her skirts to her knees.”

The recurrent themes are Cumbria, trains and arguing, fairly domestic situations but there is nothing comfortably domestic about any of the poems.  The poem ‘Train Journey, Barrow to Sheffield’ is rich with substance in the closely observed detail of travelling on a train.  There is nothing romantic in this concept, it is a down to earth observation, “even though the toilet smells like nothing/will ever be clean again,” and yet the poem moves from here to a sensual description of a journey, “still I love the train, its sheer unstoppability,/its relentless pressing,” and then the leader is led right away from here to a scene of a father up to his waist in water trying to save himself and his son, ” but in a train, there are no choices,/ just one direction you must stick to.”  This is not how the poem ends.  It ends with something completely unexpected and amusing.  I won’t tell you what it is.  You’ll find out when you buy the pamphlet.

This collection is about the ordinary world but with an ambitious take on the norm.  I have not been so excited by such a new read for sometime.  I look forward to more work from this innovative poet.

A review of the pamphlet by Clarissa Aykroyd on her rather wonderful and interesting blog http://thestoneandthestar.blogspot.co.uk/2012/09/kim-moores-rabbit-and-moon-revisiting.html

Review of my pamphlet and Julie Mellor’s pamphlet by C.J. Allen on the online magazine ‘Litter’ :  http://leafepress.com/litter5/allenMoore/allenMoore.html

Review by Jennifer Wong – from www.jenniferinlondon.wordpress.com

Published by Smith/Doorstop by Poetry Business this year, Kim Moore’s newly launched poetry pamphlet draws the reader in with hypnotic power and builds a seamless transition between truth and fable. Watch out for the curious balance between enchantment and danger in ‘The Wolf’: ‘the one who eats chalk to make his words / as white as snow’ and ‘the one who is not / as he appears’. Enchanting one with his language, the wolf, or wolf-poet figure, is so believable that ‘he can take / a house from you’.

Water imageries and wild animals articulate the complexity of one’s mind, the desire for intimacy — intimacy with people and places– and resistance against it. I enjoy the texture and expressiveness in ‘Sometimes You Think of Bowness’ while ’Hartley Street Spiritualist Church’ reminds me, in a strange way, of Larkin’s poem ‘Aubade’, the pendulum swing between devotion to poetry and faith, blurring the divide between the visible and the invisible world.

The title poem ‘If We Could Speak Like Wolves’ postulates an intimate relationship or connection that will overcome mistakes and conflicts. The vivid imagery of wolf bodies and the estuary where one can hear the wolf howls transform the abstract quality of estrangement and make it so much more palatable. The hypothesis of ‘if we could speak like wolves’ deliberately refrains from story-telling. It is as if the poet says to the reader: ‘you have to learn it the hard way.’

These poems mark the development of a sensitive and bold voice, and hold as much beauty as unrest.