Morning everybody!  I have had a few messages this week wondering where the Sunday Poem was last week – so my apologies first of all that it did not appear.  I think only for maybe the second Sunday ever I didn’t have time to put a Sunday poem up – or more correctly, last Sunday I didn’t have any energy left over after a day at the South Cumbria Music Festival and after getting back home I just collapsed into a heap in bed.

The South Cumbria Music Festival is actually a competition – it runs for just over a week with hundreds of different classes for every instrument you can think of but last Sunday was the Brass Day.  I got to the Coronation Hall in Ulverston at 8.30am loaded down with music and books in case I got bored – as it turns out the day went so quickly I didn’t open my rucksack once to get a book out – there were solo classes all through the day and quite a few of my pupils were playing so I knew I would be camping out for the day.  So for most of the day I was just watching and listening which doesn’t sound too exhausting and it doesn’t feel exhuasting at the time.

At 4.30 in the afternoon all of the kids from the two bands that I run started to arrive – Barrow Shipyard Junior Band is my band that I have been conducting for eight years – we won the festival last year and are the biggest junior band in the county with 36 players.  My other band, ‘Brasstastic’ is a beginner band made up of primary school children and they have only been playing together a year and a half.

On the Saturday before the music festival, I went to the Poetry Business Writing Day and started writing a poem about my old band conductor Rob Boulter who still conducts Unity Brass Band down in Leicester.  This got me thinking about doing competitions when I was younger.  I remember that I was never nervous when I did band competitions – something about being part of the group but also because of the way Rob behaved – he was never nervous, never stressed.  He acted like we were the most important thing – not the adjudicator or the competition administrators – if he had to make them wait because something wasn’t right with the band then he would.  He would also wear these very loud shirts – some with billowing sleeves – all of them very colourful – he would only wear them for concerts or competitions.  I never knew why – but now I think maybe it was to take our mind off the competition, to distract us, or make us smile.

Anyway, after thinking through all this, I realised that I often appeared stressed at the music festival or at concerts and I think this feeds to the band and makes them nervous.  So my secret weapon this year was to print off some silly pictures.  After we got the nod from the adjudicator to play, I held up this picture: 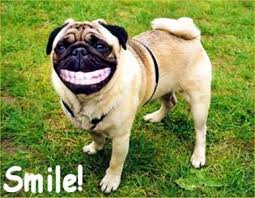 and then after that I held up this one. 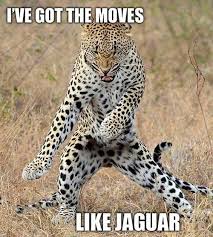 It nearly backfired when one of the more excitable younger players got a bit hysterical but he managed to hold it together.  The younger players thought it was funny – the older ones looked at me the same way we used to look at Rob Boulters’ shirts in all our teenage wisdom – with a mix of pity and amusement – but it worked – they played the four pieces the best they’ve ever played.  I was so pleased with them when we came off the stage – last year when we won, they messed up the beginning of one of the pieces and even though we won, I’m so mean I was really annoyed with them and told them all off at the next rehearsal but this year I couldn’t have cared less if we won or not.

I did the same with Brasstastic -a risky move because they are much younger and less experienced but it seemed to work for them too – they played as well as they have played before except this time I didn’t have to tell them to stop talking between pieces which was what had been happening all term in rehearsal!

Alan Fernie the adjudicator was great with the kids and when he was giving the results gave lots of detailed feedback.  This was really useful for me because it gives me an indication of what I need to work on for the next year.  So the targets for this year are not to play so loud for the Shipyard Junior Band – this was great to hear him say this as I have been banging on about them playing quieter all year and for both of my bands to build up the lower end of the band.  I’ve historically always had a lot more trumpets and cornets in my bands – probably because it is the instrument I feel most confident with but after hearing Alan Fernie bigging up the trombone I’ve had three children from Brasstastic say that they would like to join the Shipyard Band on the trombone – which is great by me as I only have one trombone player at the minute!

So the top three bands were Barrow Shipyard Junior Band who won for the second year running, Holborn Hill Youth Band came second and St Pius School Orchestra came third.  After that, I stayed to listen to a few of the adult bands and then ended up getting trapped in the hall and staying longer than I meant to which meant I got back at about 9.00pm at night – which doesn’t sound very late but when I got back my legs felt like jelly and I went straight to bed – hence no Sunday Poem.

I’ve kept running this week – I did 2 miles on Monday on my own and then Wednesday I had to have another operation on my head to remove the cyst that decided to pop up again so no running until Friday when I went on my own and just did another 2 miles.  Yesterday I did the 5k park run for the first time and had a brilliant time – I was aiming for 36 minutes going on the time that I was running on my own but I ended up running 28.49 which I was very pleased with!  I’d love eventually to run under 40 minutes for 10k but I’m a long way off from that at the minute.

The other thing that has been happening this week is our house is finally on the market – or at least there is a board up and we had our photos taken yesterday.

This weekend I’ve been at the Dorothy Wordsworth Festival of Women’s poetry.  The highlight so far for me has been seeing Rita Ann Higgins read – I’d not heard of her before, even though she is published by Bloodaxe – can’t understand why she isn’t more known over here – she is fabulous.  Today I’m off for a workshop with Gillian Allnutt and then the reading tonight will be Gillian Allnutt, Sinead Morrisey and Carol Ann Duffy.  The moment that has really touched me this weekend is Carol Ann standing up and clapping Rita Ann Higgins, Emily Berry and Patience Agbabi – she looked so supportive of them and admiring and pleased – I think that is a wonderful thing – the way she does support and encourage other poets.

So I have to go and actually get ready to go to Grasmere – but I will leave you with a wonderful poem by the poet Kathryn Simmonds.  I met Kathryn at another women’s writing festival in Cardiff.  Her new book ‘The Visitations’ is published by Seren and it is a fantastic collection.  Her first collection ‘Sunday at the Skin Launderette’ won the Forward Prize for Best First Collection and was shortlisted for a heap of other prizes – I think her new book is just as good.  She writes about motherhood in a way you can enjoy even if you don’t have children (like me!) and her poems are often poignant but also laced with humour.  I’ve said before that I don’t often find myself laughing out loud when reading poetry but she has a sequence in the book called ‘Life Coach Variations’ which did make me laugh out loud.

I’ve chosen ‘When Six O’clock Comes and Another Day has Passed’ which I think is a beautiful poem and as well as being about motherhood, is also about the life of the writer.  I hope you enjoy it – and if you would like to buy Kathryn’s book go to the Seren website at http://www.serenbooks.com or if you would like to find out more about Kathryn she has her own websit at http://kathrynsimmonds.wordpress.com/

the baby who can not speak, speaks to me.
When the sun has risen and set over the same dishes
and the predicted weather is white cloud,
the baby steadies her head which is the head of a drunk’s
and holds me with her blue eyes,
eyes which have so recently surfed through womb swell,
and all at once we stop half-heartedly row, rowing
our boat and see each other clear
in the television’s orange glow.  She regards me,
the baby who does not know a television from a table lamp,
the baby, who is so heavy with other people’s hopes
she has no body to call her own,
the baby who is forever being shifted, rearranged,
whose hands must be unfurled and wiped with cotton wool,
whose scalp must be combed of cradle cap,
the baby who has exactly no memories
softens her face in the early evening light and says I understand.